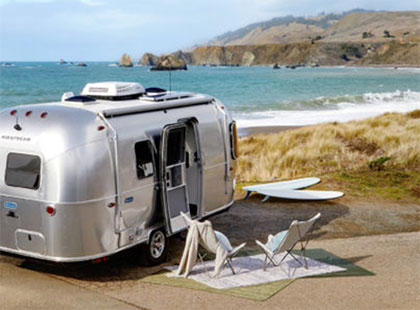 Carefree summer road trips might feel like a distant dream, but luckily Airstream and Pottery Barn have partnered up to bring us a new collection of decor and accessories to fuel our wanderlust ...more. 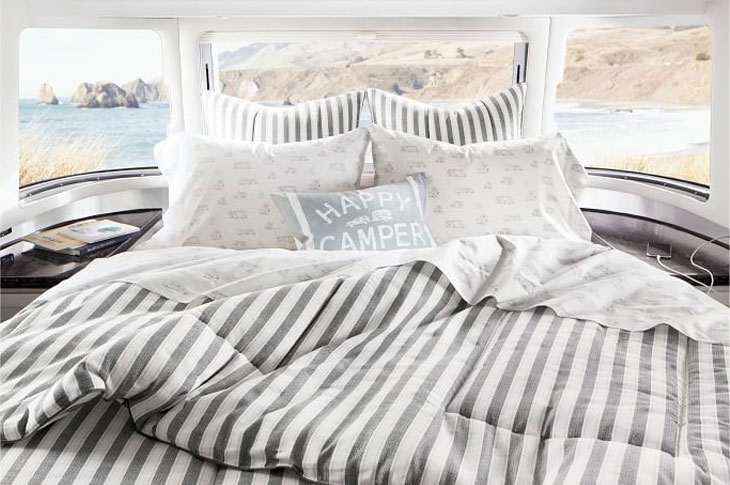 The Airstream Mendocino Striped Organic Cotton Comforter evokes the cool, cozy vibe of its namesake town: a misty, beachside locale. They're crafted entirely of organic cotton that helps keep our planet and your home more beautiful places to live. 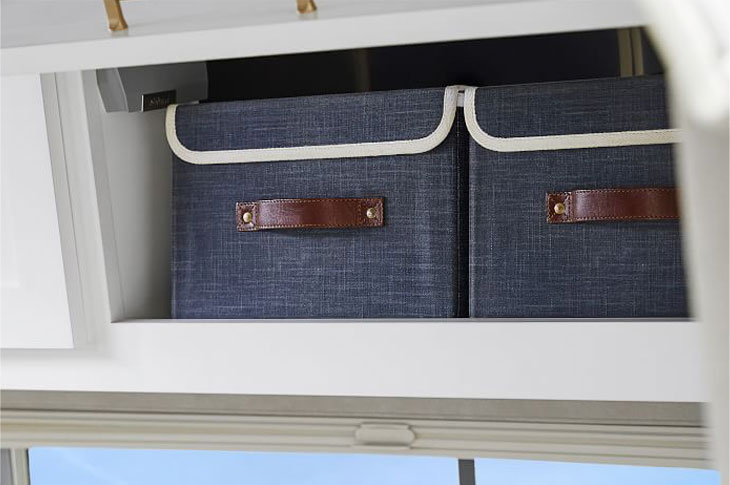 Every savvy traveler knows the importance of space-saving solutions: This Airstream Essential Canvas Bin is designed to keep your daily must-haves on hand, then to fold down and tuck into a bag, corner or shelf for easy storage. 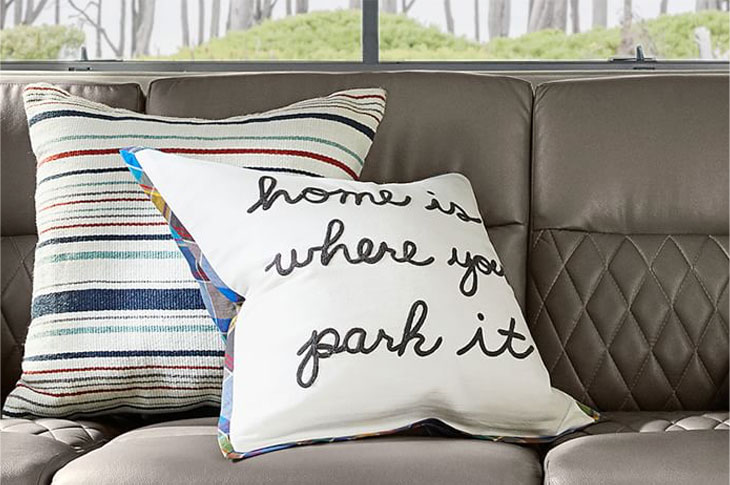 The Airstream Sentiment Pillow Cover serves as a reminder that home is where you park it. It's also reversible, showcasing a bright, cheerful plaid for two looks in one. 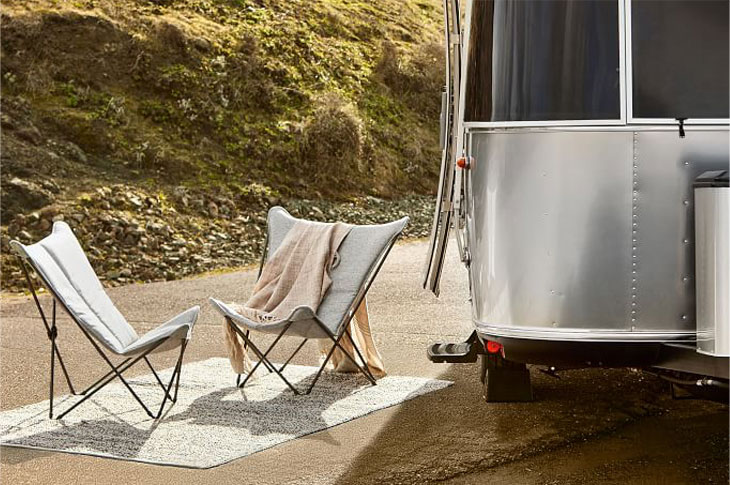 Toss it in the trunk for road trips, set it outside for glamping, or station it in a playroom: There's nothing the Lafuma Sphinx Butterfly Lounge Chair can't do. 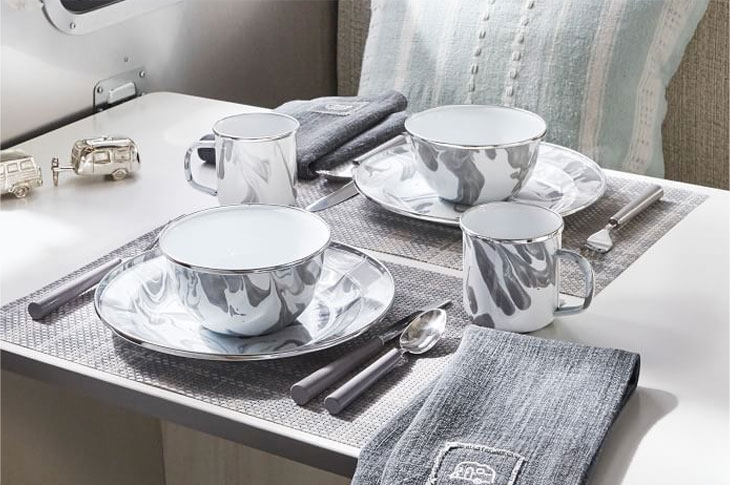 Modeled after classic camp wares, the Airstream Marbled Enamel Dinnerware Set is made of the toughest cold-rolled steel and finished in enamel to bring a dose of nostalgia to your home, both on the range and on the road. 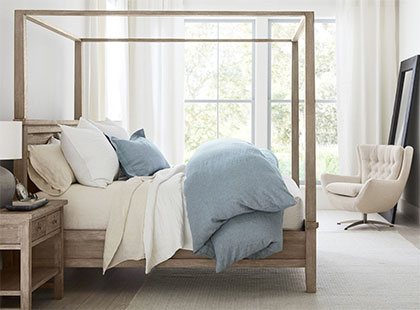 Six Design Companies That Are
Making the World Greener

Sustainable luxury is the future–see how these brands are leading the way.

Good Design Not only does Pottery Barn offer an array of organic, recycled, and Fair Trade products across all of its brands ...more , but the company also makes it super easy for customers to shop sustainable items with a separate platform on its website (labels designate sustainable items in-store). With everything from crisp organic-cotton bedding and artisan area rugs made from recycled bottles to Greenguard Gold Certified furniture, the eco-chic options are endless.

Good Impact Pottery Barn is pulling back the production curtain to showcase its commitment to the environment. One of the top 10 companies worldwide in using responsibly sourced wood and organic cotton, it has a multifaceted manifesto that includes working toward the use of 100 percent organic cotton by next year. Another plan is to finish paying back $3 million in Fair Trade premiums this year. 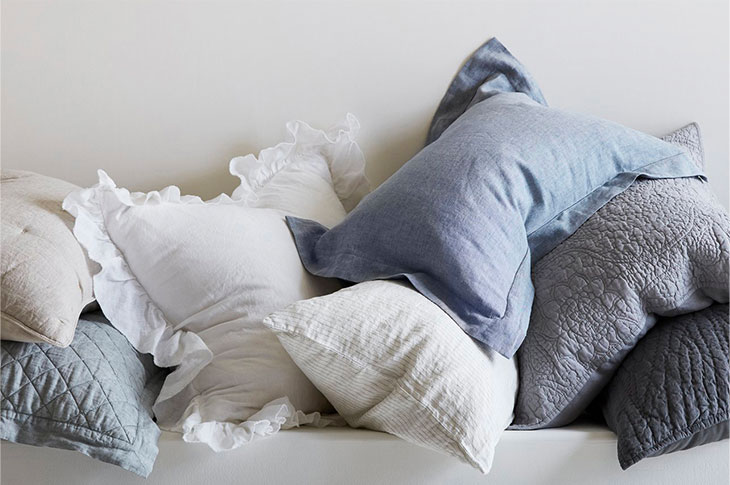 This Family Turned a Boring Garage
Into Their Most-Used Space

All thanks to some smartly-selected furniture.

Any homeowner hates wasted space–and those with kids, even more so. All parents know that with young, active kids running around, every inch of space is sacred. So, when publicist Alice Ryan felt that her home was lacking the right area ...more for her three young kids to play, work, and hang in, she turned to the most overlooked part of her California home: the garage. "It was miserable, poorly–lit, pathetically unappealing," she recalls.

Having worked with Pottery Barn in the past, Ryan turned to the company–and its in–house design services–"to wave their magic wand and make it the ultimate homework zone and movie hangout spot." But, Ryan was adamant about one thing: She didn't want the decor to feel dumbed–down or too childish. "I made clear my style and palette," she laughs. "I wanted it to be child–friendly, but I didn't want a primary color in sight." The result is a space that feels functional for kids and chic enough for adults. 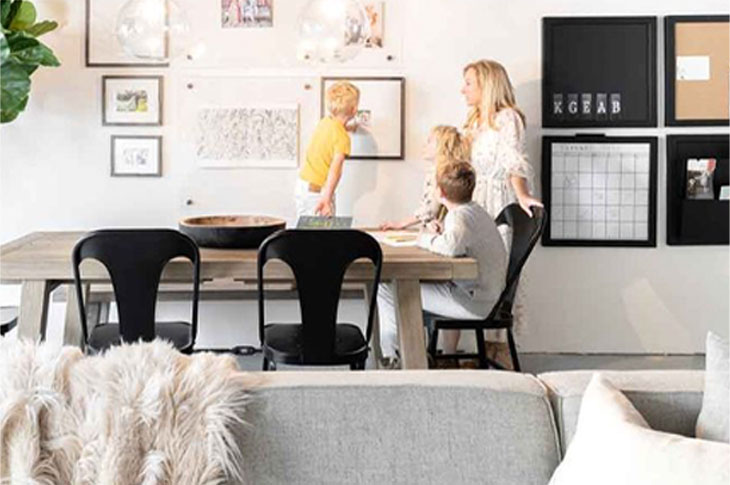 Ryan and the kids admiring photographs of the family (by Christy Gutzeit) in frames by Artifact Uprising above the space's multipurpose table. Photo: Christy Gutzeit

Activity in the new garage revolves almost completely around one central item: an expandable, multi-functional table. "It anchors the room," says Ryan. "It can function both as the place where we have Friday night pizza night and watch a movie, the place they're doing homework every day, or someplace for arts and crafts." Ryan's youngest, she notes, spent the past weekend making her Valentines there. A variety of seating around the table makes a variety of uses even easier. "Depending on what we're doing, the black metal chairs will move around," says Ryan.

Plus, the raw wood finish masks any nicks or stains. "It will just patina over time," notes Ryan. 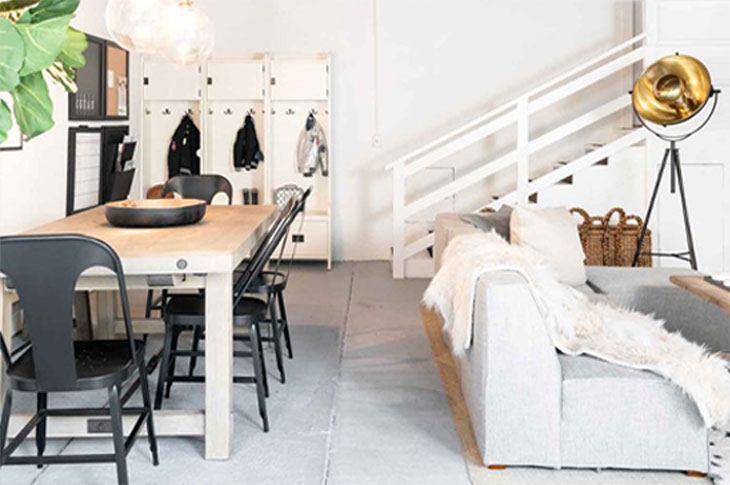 "The lockers let them have their equipment for all their activities ready," says Ryan. That includes gymnastics gear, sports uniforms, and even wetsuits. Photo: Christy Gutzeit

For more loungey hangouts, Ryan put in the closest she could stomach to a beanbag. "They all wanted beanbags," Ryan says of the kids. "Did I want that? No. So we found this great seat that feels like a beanbag but reads like a fabulous piece of modern furniture." As the success of many movie nights proves, it's a hit.

So while the once "miserable" garage has become an ideal kids space ("They've really taken ownership of it," says Ryan. "Because it was designed for them."), they're not the only ones who love it. Says Ryan, "It's really my favorite room in the house now!" 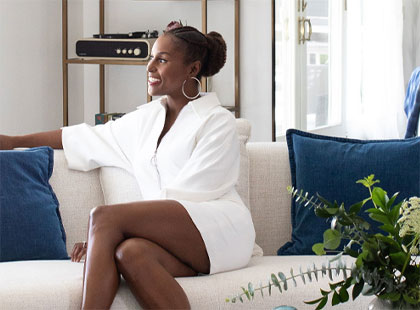 Issa Rae Tells AD All About Her
Palm Springs-Inspired Interiors

And the Insecure star's decorator calls her "the perfect client".

Issa Rae is one of those actors whom fans sometimes have a tough time separating from their beloved character. On her hit HBO show Insecure (she is the cocreator, writer, and star), she plays Issa Dee, a young woman who often ...more struggles in her career, love life, and friendships–and makes up rap songs in the mirror to encourage herself along the way. In real life, multihyphenate Rae has it a bit more together, which was helpful during the process of buying and decorating a new home recently while also juggling a schedule that includes roles in numerous upcoming movies, plus executive-producing A Black Lady Sketch Show.

"She's still in her humble beginnings phase, doing the best she can to be comfortable at age 30," says Rae of the onscreen Issa. "Her artwork is sick, and I want every piece. But other than that, [our decor styles are not similar]. She has the patience to thrift." By contrast, "I'm almost 35 and I'm pretty confident in who I am," says Rae. This meant that from her first meeting with designer Barbie Palomino, she knew what she wanted. 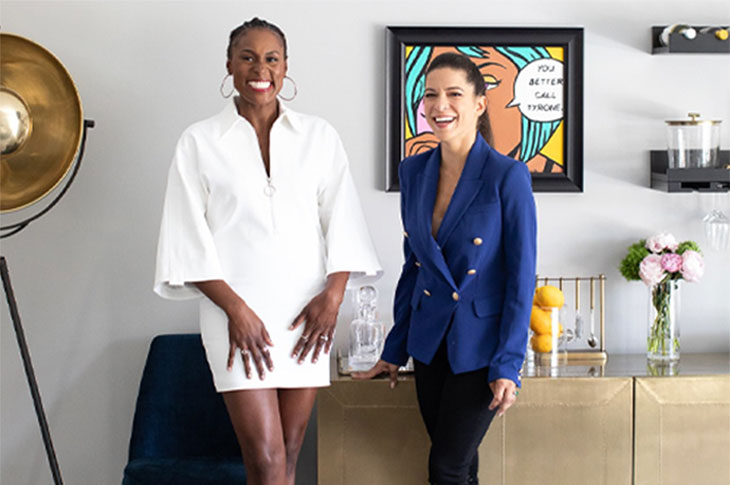 "She's the perfect client," Palomino tells AD. "I have the utmost appreciation and respect for an authentic person who knows what she likes, and maybe more importantly, what she doesn't!" The decorator partnered with Pottery Barn to overhaul Rae's two living rooms and entryway to her exact specifications. "It was important to Issa that she have a space that both could easily accommodate tons of friends, and still be capable of feeling intimate and casual. She was very involved in the entire process and signed off on every last detail," says Palomino. 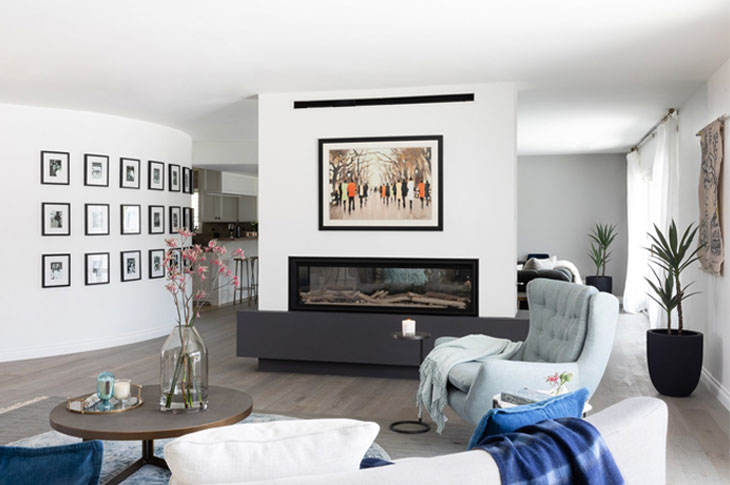 The formal living room and the family room are separated by a fireplace, and connected by a unique curved wall. Photo: Jess Isaac

Rae had already put in new floors and updated the fireplace before Palomino came in and created two distinct seating areas, a bar, and a grid of pictures on a statement-making curved wall. "The existing curved wall that defines the dining room was a bit of a challenge, even though it did inspire repeating that element with the living room's sectional," says Palomino. "We tossed a few ideas back and forth for a while before finally embracing one of the original concepts; what's more personal in any home than dozens of your photos? She selected every single image herself and it's an impressive grid. Sort of the original Instagram."

Architectural Digest: During your first meeting about this project, how did you describe what you wanted?

Issa Rae: I love to have people over and entertain, so I wanted something inviting, modern, and minimalist. I like my spaces to feel open, and I knew that I wanted my backyard and pool to feel like an extended part of the living room. Some of my favorite houses are in Palm Springs, and I wanted my home to have that same resorty, chill vibe. I also knew I wanted two living rooms: the "good room" for company only-like my mom instilled in us-and the family room for commoners.

AD: Did it turn out the way you envisioned, or did it evolve?

IR: Beyond. Barbie was very communicative throughout, and got what I wanted while also lending me her taste and thoughts. It was an ideal collaboration that exceeded my expectations.

AD: Are there any elements of the room that surprised you?

IR: The little trinkets on the shelves. There were also these faux hanging plants that I received without context, like, "where the hell do these go," and she placed them on the floor in an area that is beautiful and just works.

Rae calls the curved white couch in her formal living room her favorite piece, and Palomino notes that the blue swivel chair inspired the color palette for the entire space. Photo: Jess Isaac

AD: What is your favorite piece of furniture in the rooms?

IR: My semicircle off-white couch! It is the best. My young niece and nephews are always drawn to it to come [mess] it up when they come visit, so I know it's nice. I rarely sit on it. I also love my bar.

AD: Favorite piece of art in the rooms?

IR: I have an Adrienne Wade tapestry that reminds me to unwind and unplug. I need to listen to it more often, though. 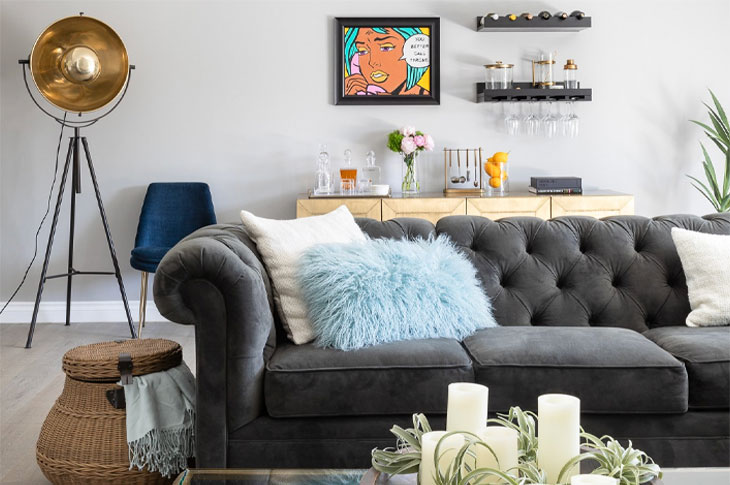 "Once we settled on light and bright for the formal living room, it felt natural to shift to the deepest, intense shades of those colors in the family room. That room just whispers, 'Netflix and chill...with a cocktail,'" says Palomino. Photo: Jess Isaac

AD: What lesson did you learn through the process of buying and decorating a house?

IR: It can be a long process, and it is so satisfying. But you're always going to want to do more over time. I'm already trying to redo my kitchen. So, Barbie, stand by! 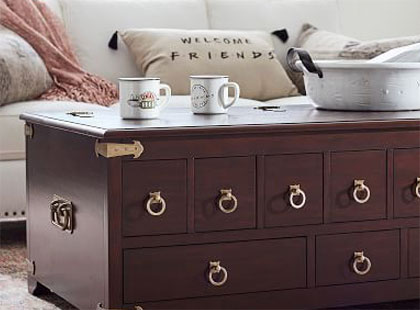 Could this be any more exciting?

In honor of the 25th anniversary of the television series "Friends," Pottery Barn has released its collection of limited-edition pieces inspired by the ...moreshow.

"Friends" fanatics can pretend they're living it up in New York City with furniture and other home decor, starting Tuesday.

One of the pieces up for sale is an apothecary table – although Phoebe may not approve – that was featured in season 6 of the show. 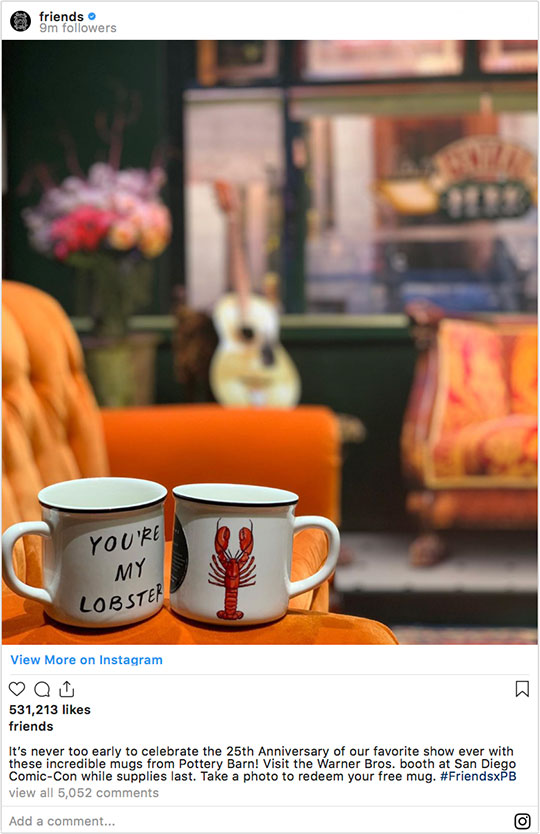 The image shows a Central Perk-esque background with two mugs, one with the line "You're my lobster" and the other with a picture of a lobster. It's a reference to Phoebe's belief that lobsters mate for life, so if someone is your lobster, you're meant to be with them forever.

If the Pottery Barn collection isn't enough, "Friends" fans can try to score tickets to a pop-up shop in New York City this fall.